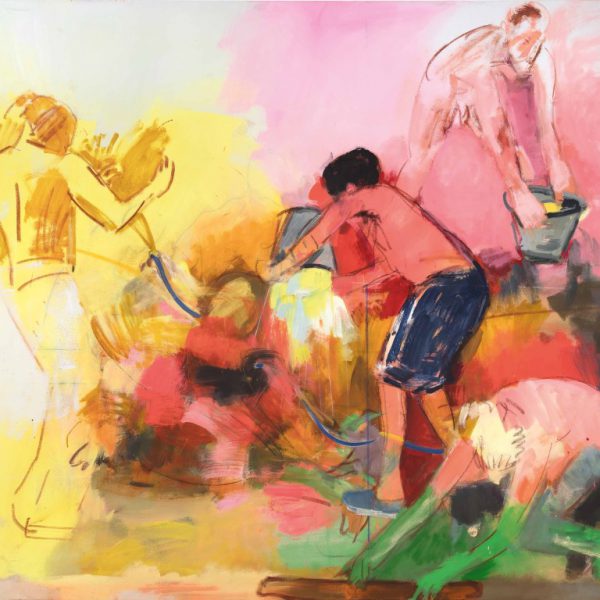 Biographical roots in the kibbutz, the “Beautiful Israel” ethos, an affinity for the history of Israeli art, and the perception of painting as part of the greater Western modernism movement – Jonathan Gold draws his images from all of these, as well as more immediate sources such as Instagram, various TV series, and random street scenes. Viewing the whole of Gold’s work through these lenses makes it possible to understand it as a dialectic between continuity and rebellion. Working in series, such as those presented here – Colors, Bathing, Group, and Admissions Committees – allows him to create different variations on a single topic, and to engage in several topics simultaneously over time.
Many of Gold’s paintings deal with relationships between people and the place of the individual – for example, the painter – as part of a system or group. Together, these depicted relationships outline a comprehensive notion of what he calls “local secularism.” Gold focuses on the relationship between the body and its physical everyday environment. Often, he places his protagonists in interior spaces (home spaces, offices, public showers); in other instances, the backdrop to the occurrence is abstract, and is only implicitly characterized as an urban space or a wild landscape.
Another tension is evident in Gold’s decision to play on the theme of “painter/house painter.” As he puts it, “I perceive the painter as part of a guild of professionals. The technical aspect is central to the act of painting. I love paint, its physicality.” Hence it is also possible to understand his striving for an artistic language as a prolonged process of trial and error. Gold adheres to traditional painting values, searching for paints and painting support that are in line with the topics that preoccupy him. Since 2010, he has been creating his own painting supports – building the stretch frames, stretching the canvases on them, covering them with a ground layer (primer), and even producing his own paints from a mixture of glue, cold wax (Cera Colla), and pigments. This paint creates a flat, matt surface, highlighting the qualities of the pure pigment. It is the seemingly organized pictorial frameworks that Gold sets for himself that also allow him a radical interpretation of the act of painting – which often clings to partialness, disintegration, and dissemination as values in their own right.