The story of Israeli art – its origins, influences, identity, and defining undercurrents – comes up for discussion on a regular basis. A few months ago, the permanent exhibition of the Mishkan Museum of Art’s collection opened, adding to the dynamic and renewed discussion in the major museums in Jerusalem and Tel Aviv, in part through exhibitions that have been organized in the past decade of their Israeli art collections.The current cluster of exhibitions, which spans most of the Museum's galleries, is also devoted to the history of Israeli art. Within the Mishkan Museum’s vibrant space – which raises questions about Israel’s central region and periphery; canonic and alternative art; continuity and rebellion; institutional and alternative exhibition spaces; and artistic, research, economic, political, and other motivations – here the emphasis is on the artist's voice. Held alongside the collection exhibits, the exhibitions offer contemplation, reflection, and tributes, rather than take a position or make an absolute statement. David Wakstein's Conversations in Israeli Art project comprises dozens of videotaped conversations with artists that lay out a broad spectrum of “backstage” information about local art-making. Lamenting the Canon is a group exhibition of five artists who took part in a Mifal HaPais Artists’ Incubator and tackled the canon of Israeli art from a personal point of view. The exhibition Berta's Choices highlights the artistic tastes of gallerist Bertha Urdang, who formulated a statement of her own on the art of the 1970s and 1980s. Each of these exhibitions offers its own addition to the resonances and meanings of the multifaceted mosaic known as the history of Israeli art.

This exhibition is the product of an Artists' Incubator devoted to the history of Israeli art that was held at the Mishkan Museum of Art, Ein Harod, with the participation of Eyal Assulin, Shira Gepstein, Ishai Shapira Kalter, Liav Mizrahi, and Nitzan Satt. The five exhibits were put together over the past year, during which the participants held meetings and conversations with curators, scholars, and artists from the local art scene. In the process, each of the participants raised questions about memory and obscurity, the quest for rectification, healing, and change. The bringing together of diverse individual voices directs attention to a common stratum informed by a remarkable burden of pain, loss, and trauma, to forgotten artists, incidental actions, waning sense of locality, or a moment frozen in time. Even if the answer to the question “Do the results of the Incubator represent Israeli art?” will remain elusive, the common features expressed here highlight the personal and biographical as essential values in the formation of the collective, the collaborative, and the local. 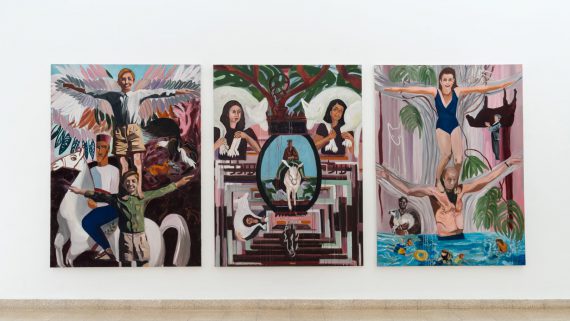 Bearing: Shepherd, Horseman and White Dog
The works in the exhibition deal with the motif of bearing in Israeli art, mostly focusing on family relationships – poses of picking up or raising aloft, and depictions of intimate situations between bearer and borne, sacrificial victim and sacrificer, and their ever-flipping power dynamics.
Gepstein creates to the light of famous Israeli artists and combines her personal family moments in monumental motives from the local art history.
The sculpture presented in the exhibition, made of a soft green sponge, is Gepstein’s interpretation of wooden and stone sculptures that present images of bearing or carrying. 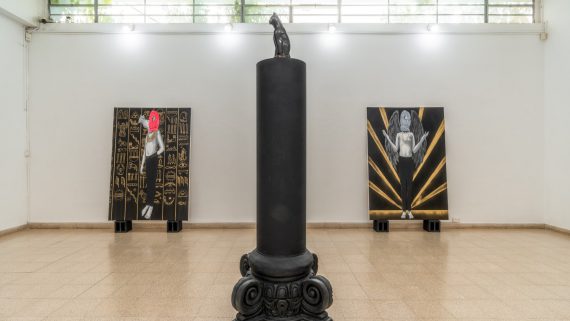 Layers
A person, especially an artist, cannot be “culture-free.”
The four large paintings on display depict my daughter, portraying children posing as, or responding to, various canonical Israeli artworks. The performative pathos of the poses represents the next generation of artists, which is influenced by its surroundings. The characters are all wearing neon-glow masks of the ski or robber variety and their identity remaining shrouded in mystery. The mask evokes negative associations that cause the viewer to be taken aback, possibly alarmed as to the intentions of the mysterious figure disguised as a work of art. The space itself is also full of tension between concealed and revealed, black and golden, menacing and ludicrous.
The black panther perched on top of a truncated black Roman column functions as the guardian of the of the “Kingdom’s” precious collection – the canon of contemporary art. 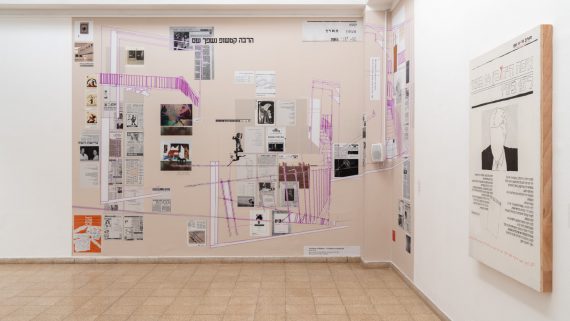 Where Were You Between May 24 and June 15
The exhibition presents a moment in the history of Israeli art that links a collective canon to a personal life story. It is a cross-section that is tied to a lifetime, a year, a month, and a single moment: the death of Satt’s brother. This personal event is encoded through the works of others and signals a condition of muteness, in which the verbal turns visual.
Freezing that moment, and the search for the events of that time in the press and culture, set out the history of art like a prism – a comprehensive configuration comprising a wide range of works of art – all of which are collectively highlight a moment in the formation of a canon.
* The exhibition title is taken from an advertisement for the Israel Festival, 1986.

Charity Will Save from Death
In this exhibition, Mizrahi tracked down forgotten women artists from Israel and Palestine, who have hardly rated a mention in the annals of local art and whose work has not been exhibited in museums, at least until the 1970s.
These women artists represent the founding generation. Each of whom, in her own way, sought to express her world. They were also social and political activists, who won awards and co-founded cultural centers. Their presentation here addresses the need to put right the local history of art, which has been shaped as a hegemonic and patriarchal narrative, as well as a personal concern to avert oblivion.
Mizrahi have visited the graves of some of the artists, and from these visits the creative processes have been derived – the Memorial Candles, the rolled-up Grave Covers, which are akin to comfort or condolence blankets; and Memorial Stones, as a sign that says, “I am here for you, I remember.” 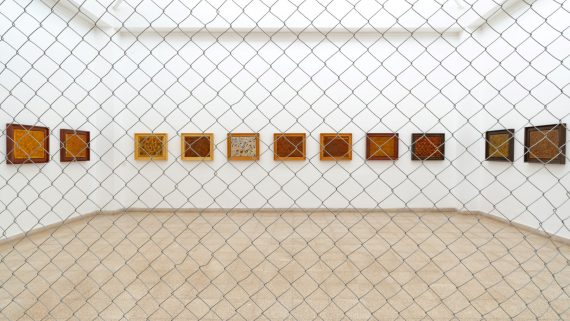 Dim View Corridor
This exhibition featuring a new series of paintings as well as a collection of curatorial objects from recent years.
The work “Reason Subverts Purity” (1935–2021) resembles an archaic institutional bulletin board. This curatorial object is ostensibly a group exhibition of the best Israeli (Jewish) painters who worked and died in the twentieth century. Their drawings are placed as raw material in this work, their story is devoid of any institutional significance.
The series “Living Paintings (No One Will See)” (2021–2022) comprises eighteen small-scale abstract and murky oil paintings, they do not depict any concrete landscape, but rather a local climate – the swirls of a gloomy soul, the energy of a yellow sun, desiccated vegetation in a severe heat wave, war, or destruction. Most of it was painted when the artist was in the throes of prolonged bouts of panic and depression, which he has suffered from every summer since taking part in the Battle of Ghanduriyah in the Second Lebanon War. 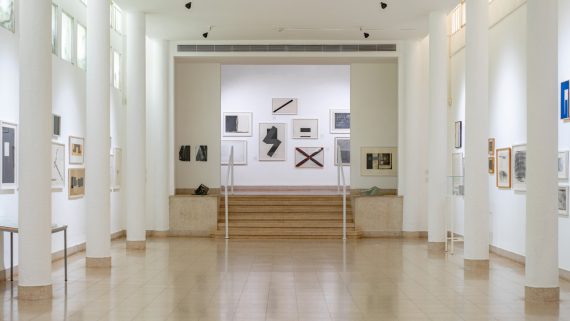 The exhibition presents the gallery owner Bertha Urdang (1912–2001) through selected artworks from her estate. This is a continuation of the exhibition Bertha Urdang: A Gallery of Her Own that was held at the Israel Museum, Jerusalem in 2020–21. The works featured, some of them displayed for the first time, reflect her choices, her period of activity, and the lively discourse among the leaders of the Reductive Abstractionist movement that followed the Lyrical Abstract of the New Horizons artists. Urdang’s impact on the development of Israeli art is unparalleled. This exhibition retraces her journey, from her hesitant entry into the Jerusalem art scene in the mid-1950s when she opened the Rina Art Gallery, through her bold move to New York in 1972 to open an art gallery there, to her return home in the late 1990s.

All works are from the Bertha Urdang estate, unless otherwise indicated 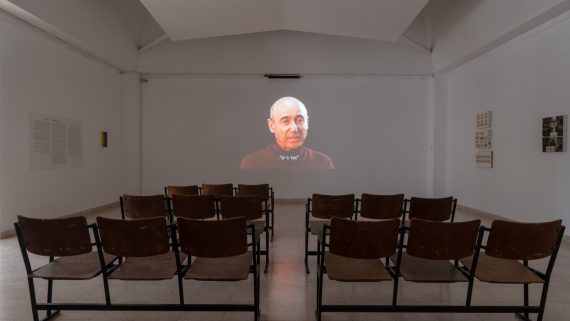 David Wakstein’s artistic biography has taken place from the outset in the space between withdrawal into the studio and forays from it; between painting (the term he uses to describe his pursuit as an individual artist) and social and collaborative art. Wakstein has taken part in various collaborative frameworks,
In the early 1990s onward, in a project that was a natural continuation of his artistic endeavor, Wakstein started video-recording conversations with leading artists of the local art scene. Later on, he video-recorded conversations with artists as part of their participation in group shows he organized.

The film General Assembly (2010) on view here comprises conversations with 53 artists, recorded at the Ramla Contemporary Art Station in February 2010, in a four-day marathon. It is a collection of monologues by many participants, who discuss a variety of issues, such as painting work methods, the treatment of language, technical solutions, working practices, painting topics, motivations for painting, the teaching of painting, and how painters grapple with the political and social reality in Israel. Since Walkstein is the instigator, director, producer, and editor of the films, they can be seen not only as documentation, but also an additional extension of his artistic endeavor, presented for the first time in a museum setting.
The artists themselves – rather than their works – are the focus in these video recordings. These verbal accounts may also be regarded as self-portraits of sorts. Collectively, they provide a comprehensive “behind the scenes” view of Israeli art and tell the story of what it means to be an artist in Israel from the artist’s point of view.