The work produced by Meir Agassi (1947, Ramat HaKovesh, Israel–1998, Bristol, UK) was essentially autobiographical, centered on his obsessive preoccupation with his self-identity. During the 1970s and 1980s, Agassi – artist, collector, poet, author, and art writer – created dozens of self-portraits, in a variety of techniques and media, including painting, drawing, printing, watercolors, photography, and collage. One notable feature of these works was their blend of image and text. They were often accompanied by meticulous documentation of the place and time of their creation, and functioned as a visual diary of situations and emotions. One of the pinnacles of this approach was his Self-Portrait of a Self-Portrait (1982), in which the artist is seen holding a door handle that has been pulled out of its socket, looking like a pistol, and his portrait is disfigured with various terms and values (such as materials, studio, diary, and mirror), along with words that describe emotions (such as fear, stress, anxiety, and pain).
About a decade later, in 1992, Agassi announced the establishment of The Meir Agassi Museum, which would serve as a conceptual and mental framework encompassing all aspects of his work. From that moment on, he ceased drawing self-portraits, and his image began instead to be reflected through the portraits and bodies of work produced by fictional characters with their own biographies. Agassi was the museum curator, its artists, texts writer, graphic designer of its merchandise, and its marketer.
Agassi produced the 22 States of Mind series on display in this room around the time that he announced the founding of the Meir Agassi Museum, and it largely marks the conceptual revolution that took place in his work. The series is divided into three sections. Eight works alludes to various artists, poets, and writers: Rothko, Clay, Boyce, Picasso, Trakl, Cavafy, Rilke, and Kafka. The second section comprises eleven works depicting mental and physical states – paranoia, breakdown, sex–love, dyslexia, dream, anxiety, fear, sleep, memory, fragility, and death – as well as three other works, which are like accompanying notes to the entire series: States of Mind, State of Mind, and Self-portrait with a Very Very Long Nose. The latter (which is also the last self-portrait that Agassi created) alludes, with its long nose, at his future preoccupation with fictional characters. The museum’s stamp that appears in these works next to Agassi’s signature declares them to belong to an ensemble dubbed The Meir Agassi Museum. 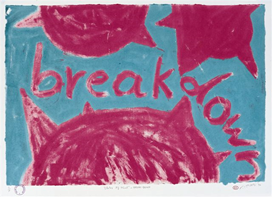 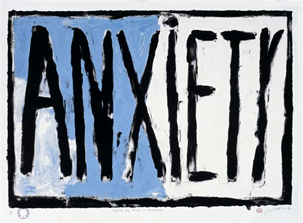