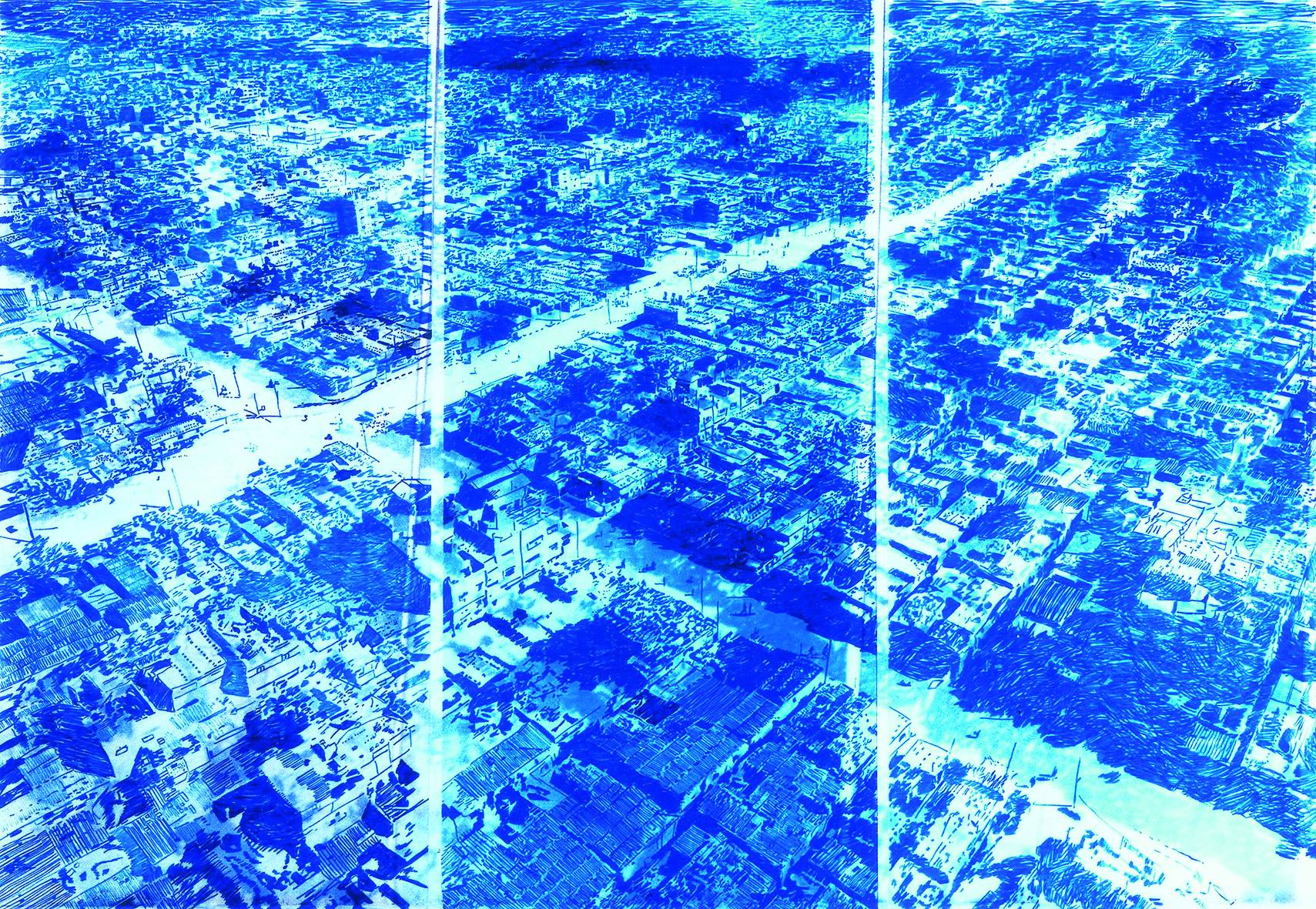 The “Aerial Photograph of Gaza” exhibition focuses on Nurit Gur-Lavy’s paintings from recent years, which are based on two aerial photographs of the Jebalia refugee camp in the Gaza Strip. The paintings direct the gaze towards the narrow alleys of the refugee camp, although their concern is not only with moral-social and political identity, but also with questions that touch upon the deceptions of the visible reality. The basis for an understanding of Gur-Lavy’s artistic choices is the life story of her father, Yossi Karni, who established the “Hadarei ‘Aza” [“Gaza Citrus”] packing house at the edge of the Gaza Strip in 1968, was its manager for many years, and after whom the “Karni Pass” is named. As such, her works exist on the seam between an intimate encounter of a daughter with her father, and the political and public space.

At the center of the exhibition at the Museum of Art, Ein Harod, are two large triptychs (256×156; 208×156), painted in Artline on Perspex. These Perspex planes are different in character to the dozens of paintings and drawings that Gur-Lavy has exhibited so far. They present a panoramic view of the Jebalia refugee camp and enable a “zoom in” onto the details of the work – the yards of the houses, the figures in the street, the tins, the bricks on the roofs, the window shutters, the mosque tower, and the shadow of the silhouettes. All these, however, remain without any sensuality, due to the materiality and the flatness of the Perspex.
The exhibition also contains work journals that document the artist’s steps in recent years, a series of prints, and selected works from the “Aerial Photograph of Gaza” series.

Despite the biographical/personal aspect of the “Aerial Photograph of Gaza” works, they have been shown in the context of feminine art and of the political discourse that revolved principally around expressions such as the Karni ‘Road’, ‘Terminal’, ‘Pass’, ‘Roadblock’. In these very days, when Israeli society is on the threshold of the withdrawal from Gaza, the exhibition’s title, “Aerial Photograph of Gaza” obtains a new meaning (the Hebrew title is Tatza ‘Aza; tatza is an abbreviation for “aerial photograph”, but can also be read as tetze, “get [or go] out [from]”). Gur-Lavy has given this name to her exhibition, as an option of a route that might make possible a new reality.

The exhibition is accompanied by a catalogue.