While preparing the exhibition "Culture and Barbarity" in Stockholm, I came across a drawing by an unknown artist, Leo Mayer. All I could find out about him at the time were the dates of his birth and deportation to Terezin, and the approximate date of his death in Auschwitz. Leo Kramar, Leo Mayers's son, who happened to live in Sweden, visited the exhibition. He showed me letters and photographs of his father, an imposing man in a wide-brimmed hat. In one of the photographs an artist stood beside his easel in a worn-out hat.

‘This is not my father’, Leo Kramar remarked. ‘It’s his brother, my uncle Bedřich, Beda. He disappeared just before World War II, in 1939. We searched for him but never found him. And now it’s no use. He was born in 1906; he has probably already passed away…”

Nevertheless, Beda was found — in a retirement home in the city of Herzliya in Israel. We met and became very close friends. Thus Leo Mayer’s only surviving drawing from Terezin led to the story which is presenting now in the exhibition “Boarding pass to Paradise”.
Elena Makarova

The ‘White Paper’ issued by the British government in May 1939 closed the last door for Jewish emigration to Palestine. It occurred at exactly the same time that emigration had become a question of life or death.

Nevertheless, for some the impossible dream eventually became reality. The hope of leaving was revived when the Nazis founded the Central Office for Jewish Emigration, directly under the Reich’s Security Ministry. Even among many Jews who had previously been opposed to the Zionist movement, there was a growing feeling that the only hope was Palestine. However, attempts at both legal and illegal emigration were dangerous. While standing in line at the emigration office, they might be seized by the Gestapo and deported to “labor camps;” if they tried to emigrate illegally, they risked being refused entry.
The group of Czech refugees bided their time in Bratislava. There they were accommodated in two ill-equipped hostels, Slobodarna and Patronka, run with the help of Slovak Hlinka Guard wardens. The Bratislava Jewish community had paid the hostel expenses and also the cost of meals. After a time they were allowed to leave occasionally, but only in twos and only with the chief warden’s written consent. The group stayed in the hostels, which were overcrowded and lacking normal sanitation, until the end of August 1940.

In September 1940 three small paddle-steamers, built to carry at most 150 tourists each, set out from Bratislava with over 1500 Jewish refugees.

The ship headed for Mauritius island, a British colony at the southern end of Africa. The exotic island, surrounded by blue lagoons, fringed with thick green vegetation and coconut palms and inhabited by creoles and British colonists, was to become a refuge for the Czech Jews for the next five years.

They were put in an old prison near the city Beau Bassin, shut off from the outside world, but allowed to live freely within the locked prison compound. The men lived in the prison itself, with the doors of the cells open. The women, however, were settled in specially built wooden huts. The men and women were kept separate. Only after several months the authorities allowed families and unmarried couples some private time together: they could meet in the prison yard during the afternoon. In the fourth year of detention, in response to the inmates’ constant demands, the gate between the women’s compound and the prison was opened, and wives and children could unite with their husbands and fathers.
Beda and Fritz had a workshop where they made wooden toys. During the last two years in the camp, Hanna Mayer joined them. Beda returned to painting and woodcuts. He received commissions to paint portraits and reproductions of the old masters. He and Fritz set up a puppet theater in the camp, to which local dignitaries and their wives were also invited. Both of them started to give art lessons for the local people.
Fritz was loved by everybody, even members of the British administration. He was an incredible caricaturist, graphic artist and sculptor, and also wrote plays for the theater. He was widely educated, spoke many languages, and his skills as a translator were constantly in demand. He was able to capture the essence of a situation instantly in his cartoons. In spite of this, neither his activities in the camp nor short trips around the island calmed him. He wanted only one thing: to leave the island and join the war against the Nazis. His internal crisis intensified until, on January 7, 1945, he committed suicide.

We deportees – more than fifteen hundred Jews, including many business people, artisans, craftsmen and teachers, people who spoke several languages, musicians, painters, and what have you – had a title: “Palestine Detainees held at the pleasure of His Majesty King George”. As far as His Majesty’s government were concerned, with Mr. Armitage as their humble servant, we would be staying on the island till the war was over and would then be repatriated to our home countries. That was the message; Palestine did not come into it.

Mr. Armitage need not have worried about keeping us busy, it happened naturally. Our industries, which included all kinds of workshops and garages, merged into the island’s economy, even contributed to the war effort, while for the island’s European “high society” we were a rich cultural infusion. (Peretz Bed Mayer)

In August 1945 the Mauritius refugees sailed back to Palestine. This time the British issued them immigration certificates. At first Beda and Hanna were sent to the Sha’ar Hefer agricultural settlement; later they moved to Herzliya and decided to get married. Beda, already in his forties, had to start a new life.

He did not change his name, as was common at that time. But he added “Peretz,” the Hebrew equivalent of “Bedřich.” In October 1945, under this name, he exhibited his art in the Kaethe Sauer gallery in Tel Aviv. Displayed there were drawings and etchings from Mauritius.

Beda worked for a short time in a zincographic works. After that, remembering his puppet-making with Fritz on Mauritius, he rented a corner in a local carpenter’s workshop and started to make puppets, but the venture was not a financial success. For several years he made a living as a house-painter. When a carpenter offered Beda work painting the cupboards produced in his workshop, the business went well and the cupboards were sold in Herzliya and a nearby village Nof Yam. He then owned and ran a building supply store for 12 years.
Even though he never received any official recognition as a painter, he did not give up his own creative work and until his final years he gave art lessons in the retirement home where he lived.

During the six years from his 90th birthday until his death, he painted more than one hundred paintings.; In these works, his style changed dramatically; the intensity of the colors remained, but figures began to appear to float, and the sharp borders began to blur.

I’m at the end of my life. And I don’t know what to do with it. This is a very unusual experience. You don’t know whether you’ll get up in the morning or not. When I draw, I don’t have the right to make mistakes – what if I don’t get up tomorrow and the thing remains incorrect forever? Everything will stay as it is. But just imagine: if not for the lady with the scythe, could we have such a pleasure from life?

I am dreaming, and I am painting the dreams. I sleep a maximum of one or two hours a night, and the rest of the time I’m thinking. The thoughts are coming… and spreading all over the skies. Sometimes I try to catch it with the colors in a painting, but sometimes I cannot. It is another dream – when you just dream of something, but cannot do it.

Today I almost don’t use a brush. There is a constant dialogue between the paints and my fingers. The paint says: This is my place, I want to be here! I love it when the colors fight with each other like in a duel.
If my fingers betray me, I’ll grip the brush in my false teeth and finish the painting with my mouth.

I lie down and feel how time is running out. At my age brains are like ice melting away.

My only luck was that I could splash out my bitterness and spite on the canvas.
Yes, it is hard to live. But it is yet harder not to live.
(Peretz Beda Mayer) 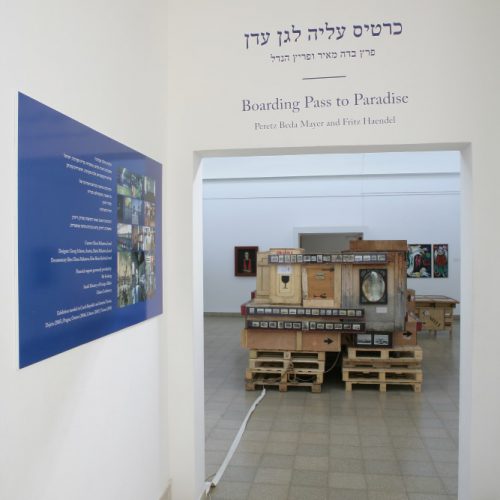 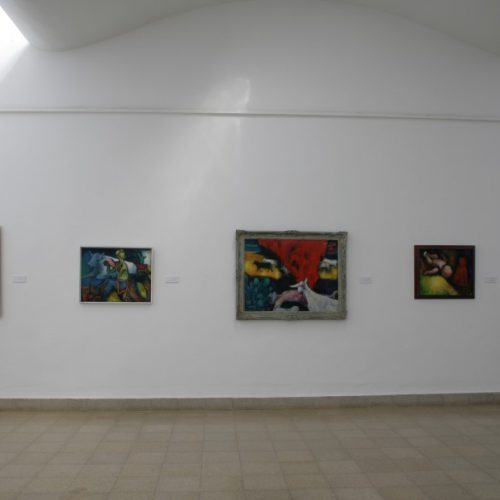 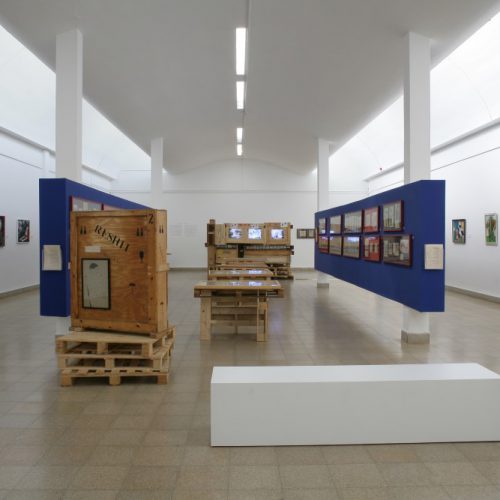 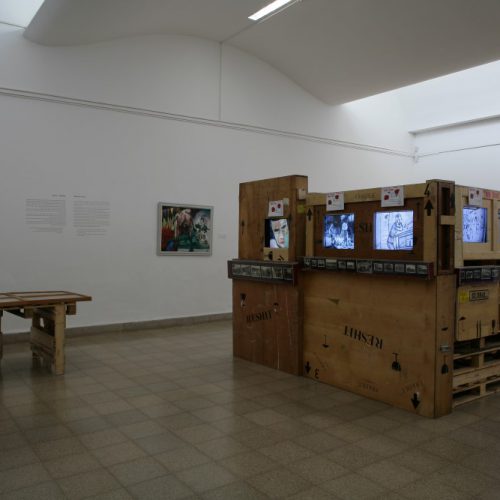