The exhibition Yechezkiel David Kirszenbaum: The Lost Generation, at the Museum of Art, Ein Harod, brings to light the fascinating oeuvre of an artist whose works form part of the museum’s collection. His works represent one of the museum’s constitutive aims since its inauguration: to document, to preserve and to display works by Jewish artists throughout the world. Today the museum’s collections include a large number of works by artists who belonged to the Jewish School of Paris − a school of immigrant artists, Kirszenbaum among them −which flourished in Paris between the two world wars.
Refugeehood and migration as an existential situation were an inseparable part of Kirszenbaum’s oeuvre, and appear as distinct themes in all its phases and all the artistic paths it followed. Kirszenbaum, who was born in Poland, studied art at the Bauhaus in Weimar in the early 1920s and received personal guidance and encouragement from Wassily Kandinsky (who even offered him a teaching post at the Bauhaus, but the proposal fell through). In the mid-1920s he was active in Berlin, and exhibited at the well-known Sturm Gallery (1927). With the rise of Nazism he moved to Paris and joined the group of Jewish artists there, with whom he shared a common background. Like many of his colleagues in the School of Paris, he had been born into a Hassidic and religiously observant home. According to a family tradition, the fact of his birth to older parents was thought of as a miracle wrought by the righteous Hassidic local rabbi, and the artist never abandoned his origins. Throughout his life he drew consolation and inspiration from his childhood existence in the Jewish town, as a blend of yearning, imagination and folkhood that he transfused into his works. He lived through the Holocaust years in France, but lost his wife and most of his relatives; a large part of his artistic oeuvre was lost as well.
Dr. Caroline Goldberg Igra has researched his life and work, and has curated the exhibition at the Museum of Art, Ein Harod. Her research on the artist is being published in a book in which she traces the story of his life: of an artist whose life and fate were inexorably bound up in the upheavals of the war, the Holocaust, and the endeavor to return to life and art after all its horrors. The works he created after the Holocaust, like works by other Jewish

artists in Paris in the same period, reflect the great shock of loss, the longing, and the endeavor to create a memorial for the world that had been obliterated, a world that had been an integral part of Kirszenbaum’s life and of his identity as a person and as an artist.

Thanks and esteem to Nathan Diament, the initiator of the exhibition, who conducted the initial research on Kirszenbaum and discovered unknown details about both his life and work. Diament’s love of art combined with the deep commitment he felt to leave a memorial to Kirszenbaum, his uncle, and to devote a significant period of his life to researching and realizing this project. Thanks and esteem, too, to Amos Diament, without whose important contribution and support this project could not have become a reality. Heartfelt appreciation and esteem to Dr. Caroline Goldberg Igra for her professional approach to both the research and curatorial aspects of the project. Special thanks to Baron David de Rothschild for his personal contribution − his mother, Alix de Rothschild, supported Kirszenbaumduring the difficult years after the war, organized a retrospective exhibition of his works in Paris (1961) and donated several of his works to collections in Israel. Heartfelt thanks to the other supporters of the exhibition and the book, in particular to Samuel Hayek, President of the National Jewish Fund in Britain.For their support and their willingness to lend paintings to this exhibition, thanks and esteem to Michael Gross, Eri Steimatzky, Tuka Yalin-Mor, Jaron Diament and Paul Lindgreen. Thanks, too, to the institutions and the individuals who assisted in the research, contributed items of information, and helped in any way in the advancement of the project:Adina Kamien – The Israel Museum; Batsheva Goldman Ida and Ahuva Israel – Tel Aviv Museum of Art; Xander Karskens – Frans Hals Museum, Harlem; Xavier-Philippe Guiochon and Claire Bernardi, FNAC, Paris; Didier Shulmann and Christine Saurin, Bibliotheque Kandinsky, Centre Pompidou, Paris; Nadine Nieszawer, Isabelle Pelletier and Veronique Balmelle, Somogy Editions d’art. Finally, special esteem and thanks for their support to the Diament family, to Fannie and Gerard Akoun, Ewa Misztal, Joel Leviand Joshua Linsler. 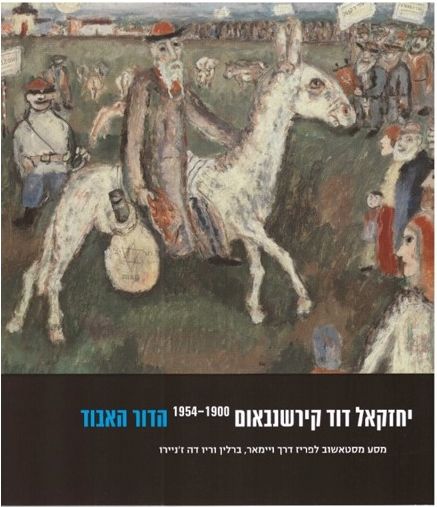