Shoshana Finkelstein is of the generation of artists who advanced abstract painting in Israel. It was a concept of art that drew on observing the landscape, while taking liberties in developing the language of painting independently, free of the necessity to faithfully describe the visible world. Her art marched along with the spirit of the time, as especially evident in the 1950s and 1960s, however Finkelstein herself was not part of a group of artists such as those that left their mark on Israeli art. She zealously maintained her freedom of spirit and chose aesthetic paths that did not always conform to the dominant trends, particularly regarding her rich palette.

Shoshana Finkelstein (Dolinsky) was born in 1911 in a small town in Belarus to educated parents, principals of the Jewish school in town. Her talent for painting was already apparent in her childhood, and she was sent to study fashion. Later on she studied painting and art in Vilna. In 1934 she joined the Zionistic movement “HeHalutz” (the pioneer) and in 1938 she immigrated to Palestine and was among the founders of the Kibbutz Afek. During that time she started studying with Hermann Struck in Haifa. Within a year she married and left the Kibbutz, and in 1941 the Finkelsteins settled in Haifa. Then she started studying with the artist P.K. Henich. Not unlike Struck, he was adept at the language of black & white drawing and printmaking.

Finkelstein developed her own visual language, full of motion and rich with colours, and during the 1950s “came out” and won recognition. In 1959 she exhibited at the Museum of Modern Art in Haifa and immediately afterwards at the Bezalel National Museum in Jerusalem. During the 1960s she turned her vigor to exhibitions abroad, first and foremost Paris, and later on she visited and painted in the United States. Following her first visit to Poland in 1986 she created paintings related to the Holocaust – most of her family perished in the Holocaust.

If Shoshana Finkelstein did not make a name for herself, it is not due to lack of talent or originality. For Finkelstein her art was “a full time job” and she spent most of her time and energy on painting, almost without touching the “politics” of art. She became highly skilled in painting on paper, and constantly explored new ideas regarding material and pigments while always returning to her beloved landscapes of Haifa, Jerusalem, Jaffa, and the Dead Sea.

“Painting is the Essence of my Life” was the title of her exhibition in the Ramat Gan Museum in 2000, five years before she died, an expression of her full commitment to painting and to its place in her life. The selection presented here offers a glance into her abundant artistic world. The strokes of Finkelstein’s brush – sometimes gentle and fleeting, at others filled with motion – are living testimony to the on-going internal energy that fueled her creation, to her power of invention and mostly, to the great passion she had to the act of painting itself. 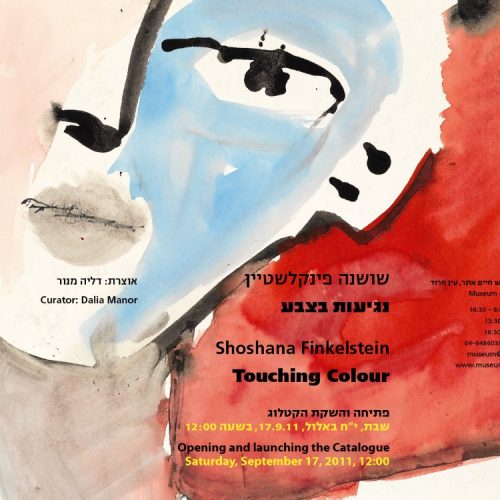