דף הבית About The Museum 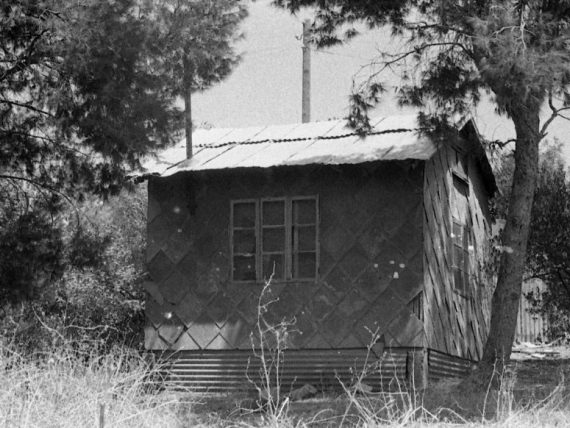 The Mishkan Heritage
The Mishkan Museum of Art started out in 1937 as an “Art Corner” in a small wooden shack used as the atelier of Kibbutz Ein Harod member, the painter Haim Atar (1902-1953) – the museum’s visionary and founder.
In 1940, the museum moved to its new home in a relatively large shack, previously used as the kibbutz school. It was renovated and its walls were covered by new jute cloths. At first, the collection was exhibited in two rooms: one for oil and aquarelle paintings and the other for drawings and prints. In 1943, the third room in the shack was included, dedicated to an art library.
In 1948, the first section of the permanent building now called Mishkan or Home for Art was opened. Architect Shmuel Bickels (1909-1975) planned a magnificently simple architectonic masterpiece, whose rare qualities lie in the relations of scale between the halls and the original and unique utilization of natural light. Exhibition halls, sculpture courtyards and a library were gradually built and added to the spacious building. Read more

Architecture
Shmuel Bickels (Lvov, 1909-Kibbutz Beit HaShita, 1975), the architect of the Mishkan Museum of Art in Ein Harod, was an inspired multidisciplinary artist. His buildings are characterized by unique treatment of filtered incoming natural light. Like other European artists who have immigrated here in the 1930s, the encounter with the glaring Middle Eastern light inspired Bickels to conduct ongoing research and develop a series of original solutions.
The roofs of the Mishkan are sculptured as a series of waves that create hidden upper windows and domes that reflect the light and let it flow like a glimmering cascade over the walls. The light source is hidden from view and it is filtered and regulated in a way that bestows a natural and tranquil splendor to the space. The entire building is oriented inwards and the secret of its charm lies in the natural light that flows through hidden windows unto its white exhibition walls. Not even a single window in the building gives out to the view outside, except a western aperture that provides a glimpse onto the roof shell construction. Read More

The Collection
Israeli painting is represented in the Mishkan collection by works of the finest artists that represent the various currents and multiple groups active throughout the history of Israeli art.
The Judaica collection houses ritual objects from scores of Jewish communities, from the 18th century to the present day, from Eastern and Central Europe, Northern Africa and the Middle East.
The Mishkan’s painting and graphics collection includes works by Jewish painters from the late 19th century and the first half of the 20th century. Mauricio Gottlieb, Shmuel Hirschenberg, Leopold Horowitz, Mauricio Minkowski, Artur Markowicz, Isidor Kaufmann and others have depicted Jewish life in Eastern Europe, be it in a romantic or realistic style. The impressionists are represented by Max Liebermann, Lesser Ury and Yitzhak Levitan. The group of expressionists and cubists from Russia and Central Europe, as well as those belonging to the Paris School, is particularly prominent in the collection, with works by Jankel Adler, Issacher Ber Ryback, Jules Pascin, Mané-Katz, Moïse Kisling, Leopold Gottlieb and many others. Read more

Friends of the Mishkan